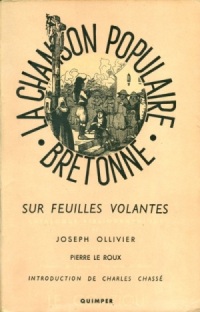 Scholars and lovers of Celtic studies of the 19th and early 20th centuries often considered broadsheets as a sub-literature, so they were generally not interested in these productions even though they were common in their day. A few exceptions exist, however, and thanks to them we can now find their collections in libraries. These include Alfred Bourgeois (1824-1904) in the Vinet collection (BnF), Arthur de La Borderie (1827-1901), Henri Arbois de Jubainville (1827-1910), Henri Gaidoz (1842-1932), Canon Jean-Marie Abgrall (1846-1926), François Vallée (1860-1949), Taldir-Jaffrennou (1879-1956), Daniel Bernard (1883-1971), Mme Lescoat de Lesquiffiou, Mme Lacaze de Kerguvelen or Mme de Villiers-Terrage.
Some printers, like Alexandre Lédan, have collected some of their productions in the form of ‘reproduction’ collections.

However, it was Joseph Ollivier (1878-1946) who produced the monumental catalog of popular song of Brittany on broadsheets (1942). The latter remains today an admirable and essential reference. Realized before the invention of photocopiers or computers, one can only wonder how he was able to accomplish this work!

This catalog is now out of print and is only found second-hand. To view the PDF (23 MB), click here..

Understandably, the numbers given by Joseph Ollivier for the songs he has indexed have been reproduced here. Indeed, it is these references that are found today in library collections.

Gérard Bailloud (1919-2010), for his part, managed to constitute a catalog of the publications in the Breton language realized at the printing house Lédan in Morlaix.
His research enabled him to complement the work of Joseph Ollivier with a number of pieces that the latter had not seen.

Working on the Lédan editions in general, he also took into account works other than those in verse or broadsheet form because of their large number of pages. However, this limited number of examples has been retained in this database to keep Gérard Bailloud’s work homogeneous.

This catalog can be obtained from SKOL (skol@bzh5.com).

The catalog of popular song of oral tradition in the Breton language (Patrick Malrieu, 1998) deals with, as its name suggests, songs from the traditional repertory.

However, some of the pieces present in this database and printed on broadsheets have become popular then traditional (or given as such in the original collections) hence their presence in this Malrieu OT catalog. The latter can be consulted at Dastum, 16 rue de la Santé, 35000 Rennes or in university libraries.
Conversely, some songs from oral tradition have been printed on broadsheets.

The descriptive record of the songs concerned by this double affiliation refers to the corresponding number of the Malrieu OT Catalog in the form of a "PM N ° of Song-Title".